Vincent Baumont lives in Hanoi, Vietnam and made ‘Red Over the Rainbow’ with our support.

Red Over The Rainbow

Covering the two first “Viet Pride” celebrations, and following its different actors, the documentary shows the milestones of the fast-growing LGBT community in Vietnam. With portraits of the different generations and genders involved in building a strong and proud community, it gives the audience an idea of the conflicts and the stigma that LGBT face but also a sense of the types of changes they are going through in Vietnam.

Vietnam is at a turning point regarding its policies towards homosexuality. In a society that is evolving at a very fast pace but still deeply anchored in family traditions, how does it feel to come out? By means of the life stories of gays, lesbians and transgender people in Hanoi, the documentary gives an overview of why Vietnam might well become the first country in Asia to allow same-sex marriage. It is a colourful and varied documentary, shot in scenic Hanoi, home of Viet Pride 2012 and 2013.

Vincent Baumont, why did you want to tell this story?

“It was just fantastic to see all this happening. The first gay pride in Vietnam was really important. It took place in the same year that the French government decided to allow same-sex marriage, and a small group of extremists were demonstrating all the time in France and getting all the media attention, and it was really frustrating to see that. It was, like, ‘Wow! You may think Vietnam is very conservative, but they might be more advanced in their opinions than you are.’ And that is what made me really get into this project.”

Other publicity for the documentary: 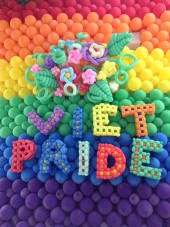